There is a little temple rarely known in rural JianJie, Shanxi Province of China.  This little temple is only 350 square meters but contains a huge amount of statuettes, carvings of the Ming Dynasty.  Presently, the temple is under the protection of Shanxi Province Arts and Culture Heritage.  Therefore, cameras were prohibited inside.  The temple is locked up majority of the time.  If you knock, the doorman would open for you to visit.

The main temple, GuanYin Tang was build from 1581 to 1583 during the Ming Dynasty. 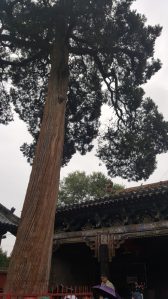 The two, thousand year-old cypress guarding the GuanYin Temple.  Inside the temple contains carving and statuettes hanging from the ceilings.  The three main Statues facing the door is Avalokitesvara Bodhisattva, Manjshri Bodhisattva and Samanabhadra Bodhisattva.  Covering the walls from top to bottom are carvings including 18 Arhats, 24 levels of heavens, 12 Prayekabuddha.  One can also find statuette of immortals of Taoism and 72 virtuous individuals.  Above the entrance, one can see three statues of Laozi, Shakyamuni Buddha, and Confucius.

There are a total of 500 statuette ranging from 2 meters to 2 millimeters plus intricate carvings are truly a treasure trove.