This wooden pagoda was built by Liao Emperor Daozong(遼道宗耶律洪基)  in around 1056 at his grandmother’s home town.  The pagoda sits on stone platform of 13 ft. and the pagoda itself is 207 ft tall.  Add together is 220 ft tall.  It is the oldest completely wooden pagoda in China, without even a nail, standing on its own for million years.  It has survived at least 7 earthquakes.  This octagonal pagoda appears to have 5 levels but it actually have 9 levels because hidden from outside view are four mezzanine levels.   Its structure is an architecture wonder worth further studies.

Many Buddha statues are in each level of the pagoda.  On the first floor, of course, is Buddha Sakyamuni sitting of the lotus.  The statue is 11 meters tall.

For the 20 centuries the Pagoda stands, it only required 10 minor repairs, but the last repair done in 1974 was more extensive than the previous due to the 200  more rounds of ammunition fired by the Japanese soldiers into the pagoda during the second Sino-Japanese War.  However, during this repair, ancient Liao’s Tripitaka, block printing and hand written scripts were found along with a Buddha tooth and other ancient relics. 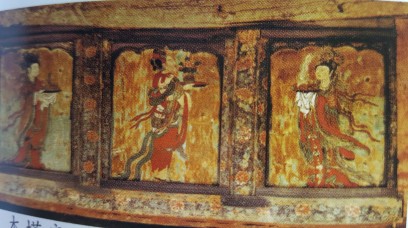