The Rhine Gorge, the Upper Middle Rhine Valley, is on the UNESCO list of World Heritage Sites due to its unique historical, cultural, geographical, and industrial combination.  This 65 kilometers of the waterway between Koblenz and Bingen had been a very important trading route for a long time before the railroads.  Because it was a major trading route and the center of Holy Roman Empire small towns and castles built along its banks.  Due to wars, the castles fell into ruins, however, the small towns pretty much stayed the same.

Because the area water currents and the sound of a small waterfall in this area at the time caused an echoing effect, people named it the murmuring rock.  Plus the position of Lorelei protruding around the bank caused many boating accidents.  Stories were spin around these odd phenomena, such as elves living in the rock.   In 1801, Clemens Brentano composed a ballad about a beautiful maiden betrayed by her love, was accused of bewitching men and causing their death.  On her way to the nunnery to serve her sentence, from the top of Lorelei Rock she thought she saw her lover and plunge to death.  The story inspired many poems, songs, folklore, and even in the works of symphonies.

The towns along the Gore stayed the same due to its livelihood which did not change much from ancient times.  Its special gorge climate and geographic condition especially the slopes facing south are a very good condition for a kind of terraced vineyards.  The wines from these vineyards are very special. 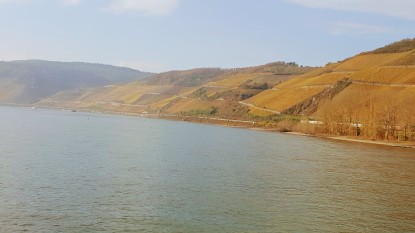 vineyards along the slopes of the Rhine Gorge 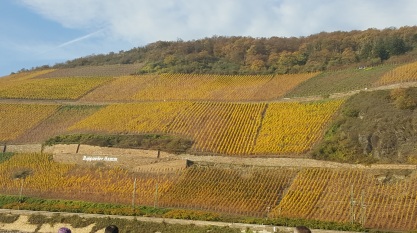 Other scenes of the Rhine Gorge.  Artists are attracted to this region and often drew inspiration from here for their creations.