Incorporate the pork, chives, soy sauce, and eggs.  Mix well and let it rest for 15 mins.  Place 1 tablespoonful of pork filling on each of the dumpling wrap.  Fold in half and seal the wrap.  (makes about 50)

In a separate pot, boil about 6 quarts of water.  When water start to boil, carefully place the dumplings into the water as you lightly stir the water.  Bring to boil again.  This time add  1 cup of cold water and bring to boil again.  Dumplings would be ready when they float to the top.  Bon Apetite! 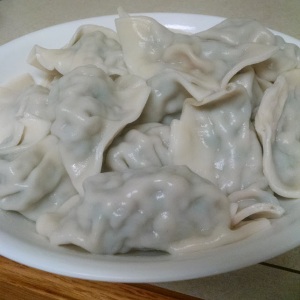 *****For extra wrap left over,  I defrost some chopped spinach sqeeze out the juice.  Place a cube of Monterey Cheese with Jalapeno peppers on each of the wrap and make the dumpling. (wrapped dumplings may be freezed.  It can be cooked directly without being defrost)

Heat a cup of cooking oil to 375 degree. ( place a slice of ginger in the oil and wait til it simmers). Place the dumplings in and  fry til golden brown.  Drain on paper towel and serve.

The extra spinach and spinach juice can be used for egg drop soup.

One thought on “Chive and Pork Dumplings”